Spirituality & Health, March/April 2012:
“Squam and its staff of creative women — determined to seek beauty in the everyday, sing out loud, and get their hands dirty — have begun a movement.” . . . read more

Arrive Magazine, July/August 2012:
“This is a place to come where you get to play and there is no judgement, no criticism — just creativity for the sake of creativity.” . . . read more

New Hampshire Magazine, June 2012:
“The most important feature of Squam, however, remains the atmosphere of creative safety that Elizabeth provides. Many call it life-changing. A brief foray through the “my story” section of Squam’s website reveals tales of synchronistic discoveries of the camps, initial reluctance to sign on and wary arrivals, followed by a lot of welcoming hugs and amazing creative breakthroughs. People leave the camp with new friends and outlooks on their lives.” . . . read more

La Vie Claire, Spring 2010:
“The purpose of Squam from day one, was to provide a safe, nurturing place where people could simply explore their creativity without judgement or criticism.” . . . read more

Uppercase, Issue 4, Winter 2010:
“Squam is about so much more than the classes. It is about being in this space, being a part of this welcoming community. A place like this is surprising to find in the art world.” . . . read more

Country Living, August 2009:
“Who Says Summer Camp Is Just for Kids? At this three-day sleep-away camp, you can stay in private lakeside cabins (On Golden Pond was filmed nearby) and choose from a variety of classes devoted to knitting, jewelry-making, songwriting, and more.” . . . read more

Sommerset Life, Autum 2010:
“The community that I came to discover at Squam has drawn me back for subsequent retreats. For each time the weekend draws to a close, I find my creative fires further stoked and I feel as though I have once gain found a group of people who truly understand the joy that comes from making and creating.”
. . . read more

Mingle, Summer 2013:
“Squam is a place of pure magic: A five-day art workshop retreat held regularly on Squam Lake in New Hampshire. It offers a break from daily life, an escape to nature, an opportunity to hone an artistic craft in a safe setting. Most importantly, it offers a chance to connect with like-minded souls, to bear witness, and to be seen.” . . . read more

Women, Summer 2015:
“Participants describe the multi-day-retreat experience at Squam as ‘magical, beautiful and restorative,’ providing the space — creative, emotional, and physical — in a stunning natural setting to engage deeply in creative pursuits that fuel the spirit.” . . . read more

Taproot, Issue 3 :: Retreat:
“Here, in these woods, in this place, it all comes together in real and tangible ways. Free from the noise of our busy days, away from the distractions of phones and the very computers that brought some of us together in the first place, creative spirits gather as a temporary village is formed, and we find community.” . . . read more 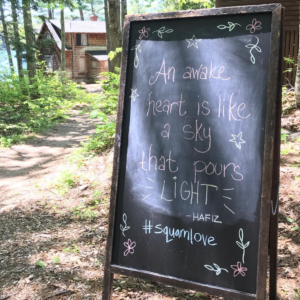